The 40th Conference of ICAMT, International Committee for Architecture and Museum Technique, was in 2014 and took place in Tbilisi, Georgia. Our Georgian ICAMT colleague Nana Meparishvili prepared the programme. The theme of this year’s Conference is:

ON TOP OF HISTORY – SITE MUSEUMS
ICAMT will focus on Site-museums built right on top of the history they are telling, the challenges of organizing, planning and building Site-Museums. The Site-Museum preserves and interprets the remains of cultural history or natural history phenomena on a site where these have been preserved in situ or reconstructed. A Site-Museum also has, like any other museum, the functions of conservation, documentation, research and interpretation (Küsel).

Site-Museums are built right on top of the story they are there to tell, on the place where the history is made, or where the items in the collection have been found.

The term “Site-Museum”
In 1982 ICOM defined the (archaeological) ‘site-museum’ as “a museum conceived and set up in order to protect natural or cultural property, movable and immovable, on its original site, that is, preserved at the place where such property has been created or discovered”.

Traditionally, museums are focused on collection, conservation and exhibition. The role of site-museums is different, the site is part of the conservation aims. The conference was started with the following questions:

The proceedings of this conference are on the page of the conference days.

This conference is made possible by the efforts of our Georgian partner:

ICAMT and ICOM Georgia are cooperating with the following organizations:

Grand Egyptian Museum
The Grand Egyptian Museum in Cairo, Egypt, is still under construction. The Grand Egyptian Museum will house around 100. 000 objects, among them 3.500 objects from the tomb of Tutankhamon. Situated on a site two kilometres west of the pyramids, the building’s north and south walls line up directly with the Great Pyramid of Khufu and the Pyramid of Menkaure. The design of the museum was reached as a result of an international architectural competition initiated by the Egyptian Ministry of Culture, under the patronage of the UNESCO Source: www.gem.gov.eg

Musealization of the Archaeological Site of Praça
The first known human settlement of what is now the city of Lisbon sits on a hill occupied by the Castle of São Jorgea. Dated to the Iron Age, the settlement was established on a strategic vantage point overlooking both the estuary of the River Tagus and its inland territory. The museum was opened in 2010. Source: www.archdaily.com/89460/ 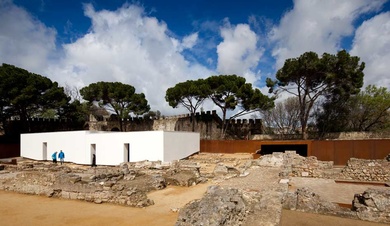 Vucedol Archaeological Museum
The museum introduces the Vučedol culture of present Croatia, which had its heyday around 3000-2400 B.C. The first excavations on the site were performed in the 19th century. The museum, fully integrated in the natural topography of the surroundings, was opened in 2013. Source: www.archdaily.com/447003/vucedol-archaeological-museum-radionica-arhitekture/ 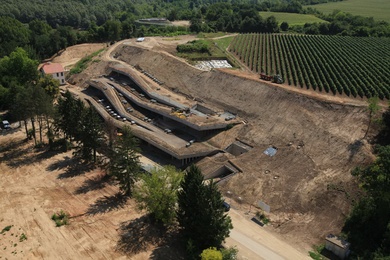 Dmanisi Museum Reserve
Dmanisi, the homeland of the first Europeans. Recent finds in Dmanisi represent the oldest evidence of humans discovered outside of Africa, dating back 1.8 million years. Comprising both the ruins of a medieval city and the prehistoric archaeological site, the museum reserve allows visitors to experience both the picturesque fortress and the ruins that cover the ancient deposits, as well as watching archaeologists excavate new discoveries.

In October, 2009 the Site Interpretation Centre opened at Dmanisi Museum Reserve. The project, carried out by Jean Francois Milou and studio Milou, has built on a close relationship with the National Museum of Georgia team and the research team at the Dmanisi site. The result has been the completion of the first phase of the project and the construction of a structure protecting the site and welcoming the public. The project consists of both a protective structure for parts of the paleoanthropological site and a space dedicated to presenting the site to the public.

The protective/presentational structure finished in 2009 represents the first stage of the master plan for the site. www.dmanisi.ge; museum.ge/index.php 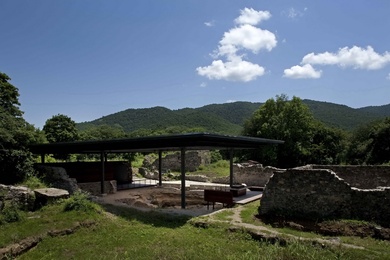 Vani site-museum, Georgia
The Vani Archeological Museum-Reserve was founded on April 21, 1981 as a local history museum, and was opened to the public in September 1985 during an international symposium. The Museum is situated on a hill close to the town of Vani in the western Georgia, on the left bank of the River Rioni. The Vani Museum-Reserve is of strategic importance with its scientific and educational programs adhering to the highest standards of the Georgian National Museum.

The museum includes: the archaeological site of Vani, the expedition base, and the museum itself. The museum houses the majority of the archeological materials discovered in the site of Vani. In 1987, after the discovery of a rich burial, the Gold Reserve was opened at the museum, which preserves the unique pieces of Vani’s ancient goldsmiths. The exhibition covers the period between 800 BCE and 100 CE. Visitors can also see an exhibition presenting the Vani site as a temple-city. This permanent exhibition presents architectural materials and gold work, as well as unique bronze figures and their fragments. The museum is temporarily closed to visitors due to renovations. museum.ge/index.php 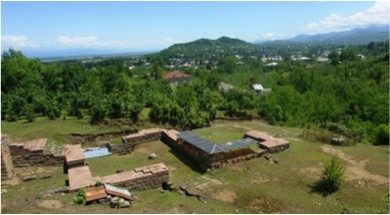 Dzalisa Museum
Dzalisa is one of the most important archeological monuments in the historic kingdom of Kartli (Iberia). The ruins of an ancient city were found in the Village of Dzalisa, in the Mukhrani Valley, 20 km southwest of Mtskheta (old capital of Georgia). The site has been identified as the City of Dzalisa mentioned in the “Geographic Manual” by the Greek geographer Claudius Ptolemy in the second century CE.

Archeological finds indicate that Dzalisa is an example of the development of rural life in Iberia, around the first century CE. The ancient settlement is considered to be a citadel. The archaeological expedition revealed cultural layers from different periods, and the ruins of early modern monuments can also be found at the site. The earliest material found in the ruins of the city dates back to approximately 200 BCE; the major buildings are dated to 100-400 CE.

The artistic floor mosaic founded in Dzalisa’s Roman-type bathroom provides evidence of the development of provincial life in the ancient Iberian Kingdom. This type of mosaic can also be found in Bichvinta Basilica (Abkhazia, Western Georgia) and the village of Shukhuti (Guria, Western Georgia), which features Roman bathrooms in dating to 200-600 CE. The museum is temporarily closed to visitors due to renovations. museum.ge/index.php. 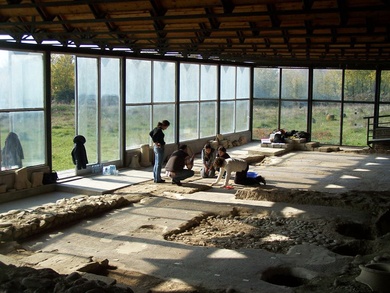 Georgia is a sovereign state in the Caucasus region of Europe. Located at the crossroads of Western Asia and Eastern Europe, it is bounded to the west by the Black Sea, to the north by Russia, to the south by Turkey and Armenia, and to the southeast by Azerbaijan. The capital of Georgia is Tbilisi. Georgia covers a territory of 69,700 square kilometres (26,911 sq. m.), and its population is almost 4.7 million. Georgia is a unitary, semi-presidential republic, with the government elected through a representative democracy. Georgia, located at the crossroads of Europe and Asia, is a combination of uniqueness and diversity. The country, known as the cradle of wine offers Caucasus mountain range, Black Sea coastline, curative climate and mineral waters, national parks and UNESCO Heritage Sites, rich culture, delicious cuisine and famous Georgian hospitality. From the architecture of Tbilisi’s Old Town to the vineyards of Kakheti; from the ancient stone towers of Svaneti to the beaches and nightlife of Batumi, there is something inspiring and exciting for everyone. Georgia has a unique, welcoming culture which explains its world-famous hospitality. With its own alphabet and language, and many world-famous artists, Georgia will surprise and delight you at every turn. 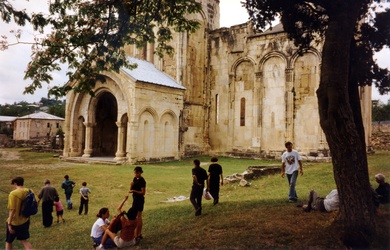 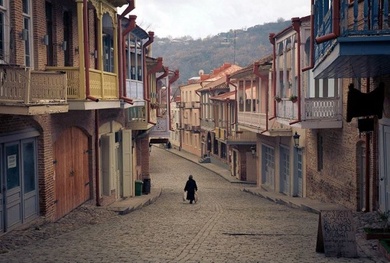 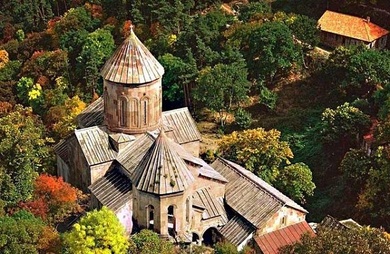 Tbilisi, formerly known as Tiflis, is the capital and the largest city of Georgia, lying on the banks of the Kura (in Georgian – Mtkvari) river with a population of roughly 1.5 million inhabitants. Founded in the 5th century by the monarch of Georgia’s ancient precursor Kingdom of Iberia. Tbilisi has served, with various intervals, as Georgia’s capital for more than a thousand years. Under the Russian rule, the city was the seat of the Tsar’s viceroy and has served, from 1801 to 1917, as the Imperial capital of the entire Caucasus, including Georgia’s current neighbours. Located on the south eastern edge of Europe, Tbilisi’s proximity to lucrative east-west trade routes often made the city a point of contention between various rival empires throughout history and the city’s location to this day ensures its position as an important transit route for global energy and trade projects. Tbilisi’s varied history is reflected in its architecture, which is a mix of medieval, classical, and Soviet structures. Historically, Tbilisi has been home to people of diverse cultural, ethnic, and religious backgrounds, though it is overwhelmingly Eastern Orthodox Christian. Notable tourist destinations include cathedrals like Sameba and Sioni, classical Freedom Square and Rustaveli Avenue, medieval Narikala Fortress, pseudo-Moorish Opera Theater, and the Georgian National Museum. 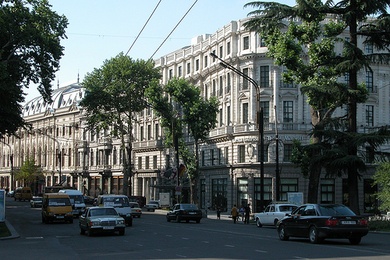 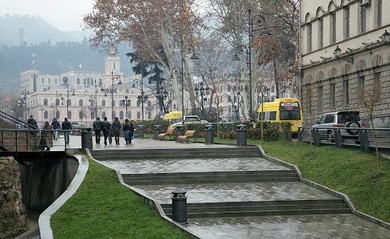