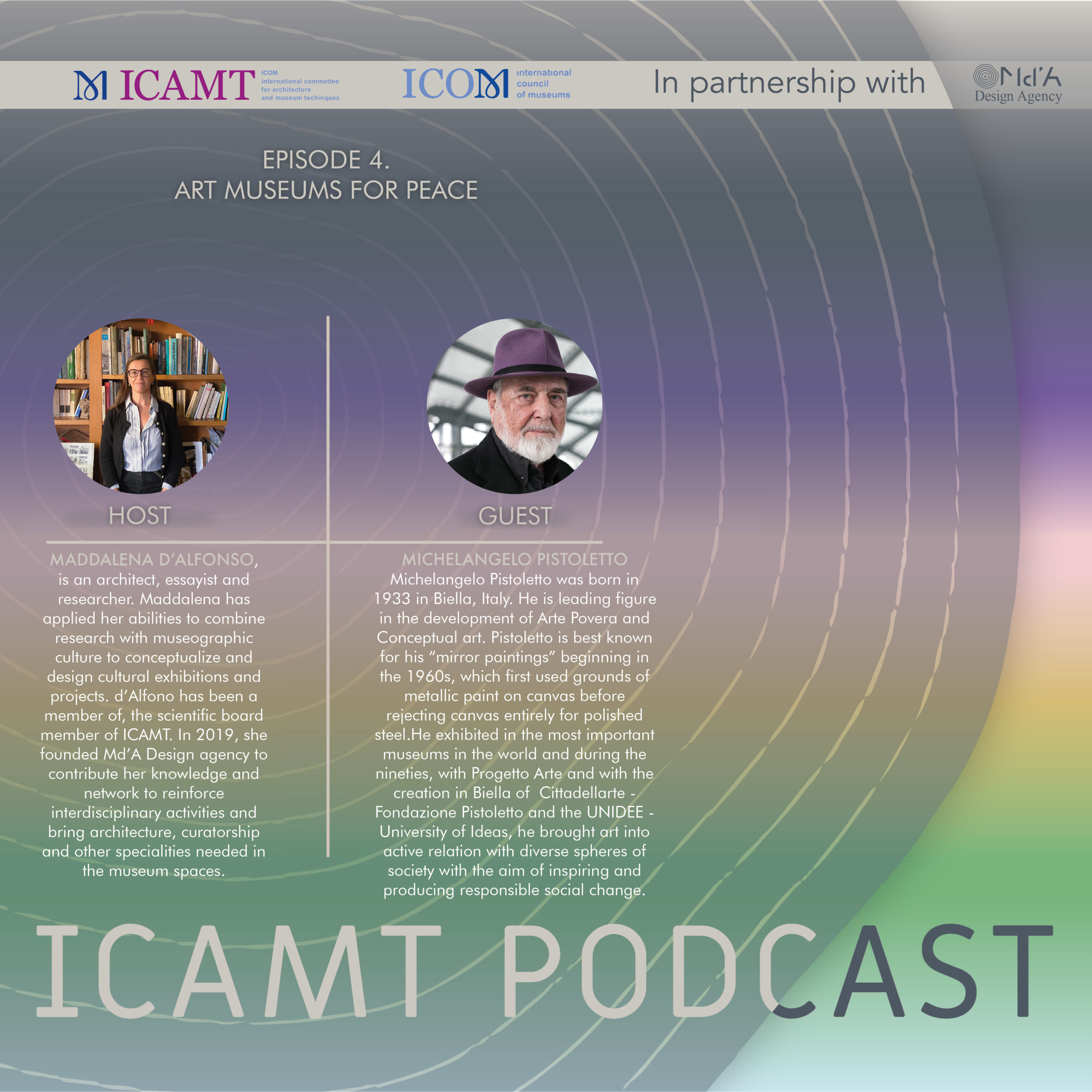 Michelangelo Pistoletto – was born in Biella in 1933. He began to exhibit his work in 1955 and in 1960 he had his first solo show at Galleria Galatea in Turin. An inquiry into self-portraiture characterizes his early work. In the two- year period 1961-
1962 made the first Mirror Paintings, which directly include the viewer and real time in the work, and open up perspective, reversing the Renaissance perspective that had been closed by the twentieth-century avant-gardes. These works quickly brought Pistoletto international acclaim, leading, in the sixties, to one-man shows in important galleries and museums in Europe and the
United States. The Mirror Paintings are the foundation of his subsequent artistic output and theoretical thought.
In 1965 and 1966 he produced a set of works entitled Minus Objects, considered fundamental to the birth of Arte Povera, an art movement of which Pistoletto was an animating force and a protagonist. In 1967 he began to work outside traditional exhibition spaces, with the first instances of that “creative collaboration” he developed over the following decades by bringing together artists from different disciplines and diverse sectors of society.
In 1975-76 he presented a cycle of twelve consecutive exhibitions, Le Stanze, at the Stein Gallery in Turin. This was the first of a series of complex, year-long works called “time continents”. Others are White Year (1989) and Happy Turtle (1992). In 1978, in a show in Turin, Pistoletto defined two main directions his future artwork would take: Division and Multiplication of the Mirror and Art Takes On Religion. In the early eighties he made a series of sculptures in rigid polyurethane, translated into marble for his solo show in 1984 at Forte di Belvedere in Florence. From 1985 to 1989 he created the series of “dark” volumes called Art of Squalor.
During the nineties, with Project Art and with the creation in Biella of Cittadellarte- Fondazione Pistoletto and the University of Ideas, he brought art into active relation with diverse spheres of society with the aim of inspiring and producing responsible social change. In 2003 he won the Venice Biennale’s Golden Lion for Lifelong Achievement. In 2004 the University of Turin awarded him a laurea honoris causa in Political Science. On that occasion the artist announced what has become the most recent phase of his work, Third Paradise.
In 2007, in Jerusalem, he received the Wolf Foundation Prize in the Arts, “for his constantly inventive career as an artist, educator and activist whose restless intelligence has created prescient forms of art that contribute to fresh understanding of the world.” In 2010 he wrote the essay The Third Paradise, published in Italian, English, French and German. In 2012 he started promoting the Rebirth-day, first worldwide day of rebirth, celebrated every year on 21st December with initiatives taking place all around the world.
In 2013 the Louvre in Paris hosted his personal exhibition Michelangelo Pistoletto, année un – le paradis sur terre. In this same year he received the Praemium Imperiale for painting, in Tokyo. In May 2015 he received a degree honoris causa from the Universidad de las Artes of Havana in Cuba”. In the same year he realizes a work of big dimensions, called Rebirth, situated in the park of the Palais des Nations in Geneva, headquarters of the UN.
In 2017 the text written by Michelangelo Pistoletto Ominitheism and Demopraxy. Manifesto for a regeneration of society was published. Between 2018 and 2020 the activity of the Third Paradise has further intensified, in particular through the development of an international network of Embassies and Forums. In these same years he has been particularly active in various South American countries, with personal exhibitions and a series of initiatives linked to the Third Paradise.

Maddalena D’Alfonso is an architect, essayist and researcher. Maddalena has applied her abilities to combine research with museographic culture to conceptualize and design cultural exhibitions and projects. D’Alfonso has been a member of, the scientific board member of ICAMT. In 2019, she founded Md’A Design agency to contribute her knowledge and network to reinforce interdisciplinary activities and bring architecture, curatorship and other specialties needed in the museum spaces.

Listen us on channels: