This years conference is in Shanghai, China. This is also the city for the 22nd General Conference of ICOM. The ICOM conference theme is ‘Museums for Social Harmony’.

Shanghai is currently witnessing a major expansion in museum building and ICAMT’s programme will focus on several of the significant recent projects. As with previous conferences, this will be an opportunity to take an overview of developments in the City and look in detail at specific aspects and buildings.

The theme of ICAMT is ‘New Museums of China’. 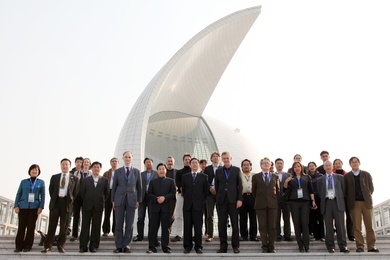 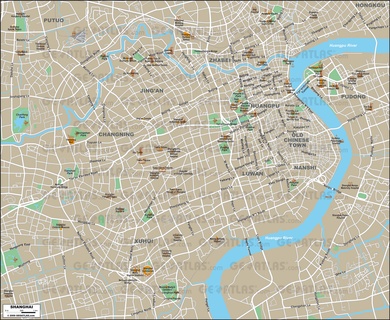 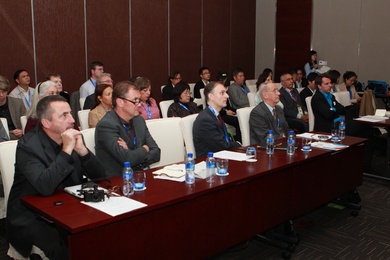 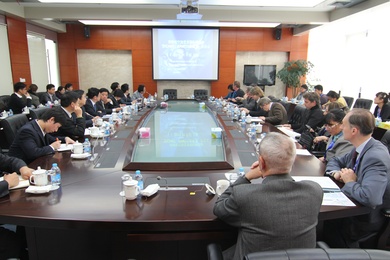 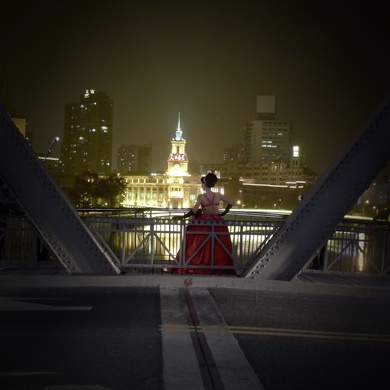 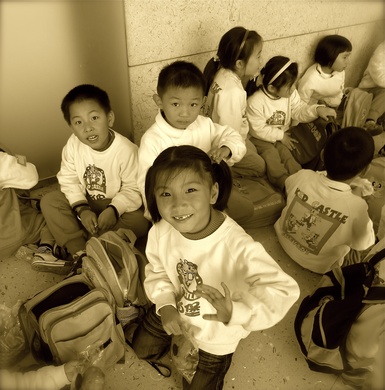 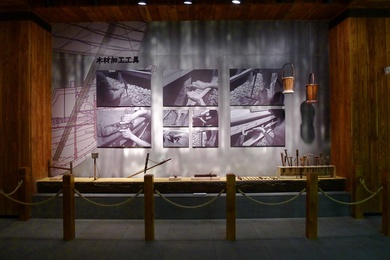 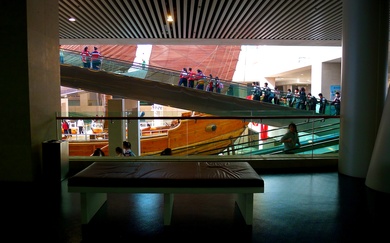 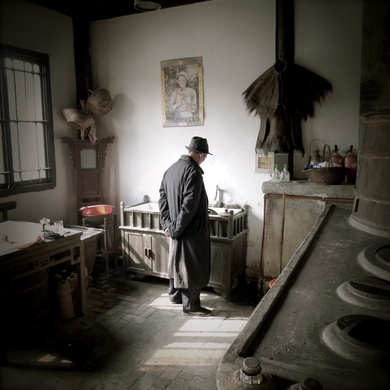 A Building Boom as Chinese Art Rises in Stature

After years of fevered activity, museum building and expansion in the United States have slowed to a crawl under a low-lying economic cloud. In Europe, where the climate is even stormier, venerable state-financed institutions go begging for cash.

In China, by contrast, the fiscal sun shines.

Museums — big, small, government-backed, privately bankrolled — are opening like mad. In 2011 alone, some 390 new ones appeared. And the numbers are holding. China is opening museums on a surreal scale.

Many are multipurpose affairs, mixing history, ethnography, science, politics, art and entertainment. The museum devoted only to art is a relatively novel concept in China. Models for it, most of them Western, are still being sorted out, though they tend to line up at either end of the temporal spectrum, focusing on the very new or the very old.

Until recently, museums of contemporary art in China had been privately run, either as corporate entities or as the vanity showcases of rich collectors. Last October, an important precedent was set with the opening of the Shanghai Contemporary Art Museum, the country’s first government-supported museum of up-to-the-minute work.

If official acknowledgment of the importance of Chinese art’s international stature was long delayed, it was fairly bold when it arrived. The Shanghai museum, popularly known as the Power Station of Art — it’s in a converted 19th-century power plant — is physically spectacular. It opened with a major globalist bang in the form of the 9th Shanghai Biennale, which filled the capacious interior and spread out into the surrounding city.

The Biennale still has a little time to run; it closes March 31. Meanwhile, some 1,600 miles west of Shanghai, at the oasis city of Dunhuang on the edge of the Gobi Desert, another museum, or something like a museum, far less conventional than the Power Station, is under construction. Its purpose is not to attract crowds to new art, but to keep them away from damaging contact with old art, specifically the ancient and rapidly deteriorating Buddhist murals that cover the interiors of hundreds of caves in the Dunhuang area.

Painted between the fourth and 14th centuries at a central point on the Silk Road, the caves constitute a virtual museum of cosmopolitan Chinese culture spanning a millennium.

As different as they are, the Shanghai and Dunhuang museums share one quality typical of China’s new cultural institutions: ambitiousness. Often this is simply measured in size.

When the revamped National Museum of China opened in Beijing in 2011, much was made, officially, of its being, square foot for square foot, the single largest museum of any kind in the world, even though the history of China it told was strategically truncated.

The taste for gigantism was evident again in Shanghai last fall. On the same October day that the Power Station opened, so did a second state museum in Shanghai, the China Art Museum, sometimes called the China Art Palace. Dedicated largely to 20th-century Chinese modernism, and housed in a zany lacquer-red structure originally erected for the 2010 World Expo, it advertised itself as the biggest museum of new art in the country. So it is, though anyone could see that its exhausting display would benefit from serious editing.

But Shanghai’s two state museums are only the tip of the city’s new-art iceberg, with smaller institutions making up in sheer numbers what they lack in size. Most of the smaller museums are privately owned and financed. At least two, the Minsheng Art Museum and the Rockbund Art Museum, have solid reputations.

The Minsheng, supported by a banking corporation, specializes in contemporary Chinese art. Under its deputy director, Zhou Tiehai, himself a well-known artist (his satirical “Joe Camel” paintings made the international rounds a decade or so ago), the museum has organized valuable retrospectives for midcareer artists who have been influential in China without being well known abroad.

The Rockbund, which opened in 2010, operates as a kind of kunsthalle, with rotating shows and no collection. It is notable for highlighting non-Chinese art, a trend that has spread to larger museums. When the China Art Palace opened it featured a special show, “Congratulations From the World,” of premier odds-and-ends loans from the British Museum, the Rijksmuseum in Amsterdam and the Whitney Museum of American Art. The Power Station recently played host to Surrealist surveys from the Pompidou Center in Paris.

An international mix is the rule in the proliferating number of vanity museums created by private collectors.

Late last year, Liu Yiqian, a billionaire Shanghai investor, and his wife, Wang Wei, opened their Dragon Museum (also known as the Long Museum), with holdings that included ancient bronzes, Mao-era paintings and contemporary works. The couple’s attention is now focused exclusively on the new and, being ardent shoppers, they have plans for a second museum in the city.

That will be joined by yet another museum, to hold the collection of Budi Tek, a Chinese-Indonesian entrepreneur who in 2011 made the Art & Auction list of the 10 most powerful figures in the international art world. At the time he had been buying for a scant six years but had already established a museum in Jakarta. Now, thanks to a Chinese government deal, he has at his disposal a building, an old airplane hangar, ready to be renovated and expanded for a museum in Shanghai.

Given the current trophy value of new art in China, and the fact that the country has, according to Forbes, the world’s second-highest number of billionaires, the prospect of further private museums seems endless. How those museums will shape up, though, is a question. Building walls is one thing; gathering significant work is another.

Many private collections now are simply products of what the global market pushes: the same three hot Chinese artists, hot European artists, and so on. But while museums for such collections proliferate, China still has no museum offering anything like a comprehensive historical view of the country’s contemporary art over the last 30 years. And features that are taken for granted in museums elsewhere — scholarship, educational outreach, overarching curatorial perspectives — are absent or in a nascent stage in many of China’s institutions of new art.

Without knowledgeable administrative oversight, what is to prevent future state-sponsored museums of new art — and surely there will be more — from mindlessly going the bigger-is-better route? What is to prevent private museums from being glorified storage facilities — places for collectors to park art, with no higher purpose than to flaunt personal power through material accumulation?

Higher purpose is precisely what the Dunhuang project has going for it. Or maybe higher purposes: to preserve the past, but also, symbolically, to right past wrongs.

Buddhist caves are found in several sites around Dunhuang, but a large majority, some 700, are carved into long cliffs at a place called Mogao several miles outside the city. According to legend, in the fourth century a wandering monk was drawn to Mogao by a vision of flashing lights. Believing the place holy, he scooped out a cave from the cliff and stayed.

Other monks came. More caves were excavated as temples and meditation halls, and their walls covered with paintings. Stucco sculptures of the Buddha, some very large, were created and painted to produce total decorative environments. The site became a magnet for pilgrimages, and a major center of learning with a vast library of handwritten manuscripts gathered from imperial China to the east, and India and beyond to the west.

In the 14th century, as trade shifted from land to sea routes, traffic dropped off; the number of monks diminished. At some point, a library of some 50,000 manuscripts was sealed up in a single cave for safety. Mogao’s existence was forgotten. In the late 19th century, it was rediscovered, and starting in 1900 a succession of explorers — from Europe, Russia, Japan, the United States — arrived on the scene. They chipped paintings off walls and sent them home. They found the sealed library, divided it up and shipped most of it out. The Qing dynasty did nothing to prevent any of this.

It was only long after that, in the 1940s, that China fully reclaimed the caves and began restoring them. Over time, their mystique grew. In 1979, the year they were opened to the public, 20,000 visitors came. By the late 2000s, the annual count had soared to 800,000. By this time, the threat of damage to the paintings, through exposure to human-generated humidity and carbon dioxide, had become severe. Today, almost all the caves are closed.

To preserve Mogao as both a work of art and a tourist goal, archaeologists in charge of the site submitted a proposal to the Chinese government for a visitor center that would let people experience the caves with minimal access. The plan was approved. The visitor center, designed by the Beijing architect Cui Kai as a group of futuristic, dunelike domes, will open this year.

The operation will be carefully regulated. Visitors will come to the center, be shown a short film on the Silk Road history of Dunhuang, and then see immersive digital projections of several of the most elaborate cave interiors. They will then go a few miles by bus to Mogao, where they will see several real caves and spend time in a museum of Mogao artifacts — portable sculptures, textiles, handwritten scrolls — before returning to the center.

A selection of such objects will be at the China Institute Gallery in Manhattan beginning April 19 to kick off “The Year of Dunhuang,” a series of events geared to attracting Western attention, and dollars. Of the $52 million that the center will cost, $33 million is from the Chinese government; the rest must be raised independently.

This project is by no means the only example of digitally assisted conservation in China. A similar one was documented in a show called “Echoes of the Past: The Buddhist Cave Temples of Xiangtangshan,” which was organized by the Smart Museum of Art in Chicago in 2010. But Dunhuang holds a special place in China’s cultural imagination. To care for it is to make amends for past neglect. Perhaps most important, to see the art of those caves in place at the desert’s edge is a deep experience.

Will that experience be as intense with some digital intervention? And if so, how much is acceptable? As in matters of contemporary culture, China is asking questions, about both the nature of art and the function of museums, that we rarely consider. But with money for our own cultural institutions hard to come by; with billionaire vanity museums on the rise here too; and with a 21st-century museum audience addicted to seeing art through cellphone screens, China’s long museological learning curve has much to teach us.